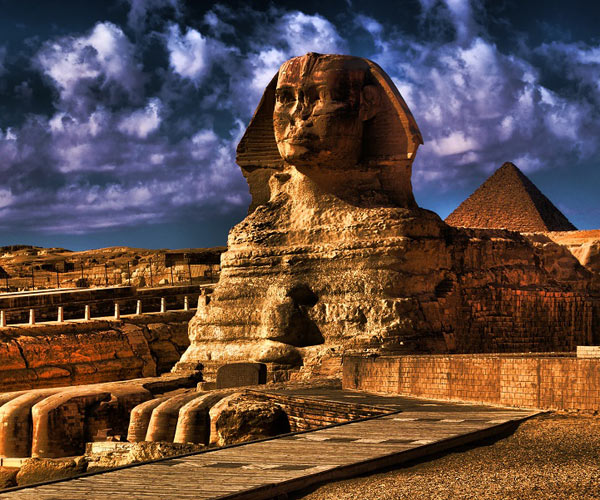 The Giza Sphinx, with its extraordinary dimensions (it is long 73 meters, 6m wide and over 20m tall) it is considered the greatest monolithic statue in the World. According to the official archeology it was built by Chefren (Userib) or by his father Cheope, about 4.500 years ago. This sculpture represents a leon with a human face.

When the Giza necropolis was abandoned, the sand covered the Sphinx up to its shoulders. In 1.400 BC the young Thutmose IV unearthed the Sphinx, after have dreamt the God of Sun, Ra-Harakhti, who promised him the kingdom if he had freed the statue from the sand. Once he became King, Thutmose did carve a granite stele which was positioned between the paws of the Sphinx to celebrate the event.

Then, the sand prevailed again. Nowadays it is possible to visit the Sphinx thanks to Giovanni Battista Caviglia, who in 1817 started the works which leaded to the revelation of the statue to the World; these works were continued by Auguste Mariette in 1853 and finished by Gastone Maspero in 1886. Unfortunately, the Sphinx was subjected to many damages during the centuries, due to the time, erosion and to the human being. Its nose was damaged, according to Arabic sources, during the XIV century AC.
(Source: http://mistero.xoom.it/virgiliowizard/la-sfinge-di-giza)

REQUEST A CUSTOM QUOTE WITHOUT OBLIGATION